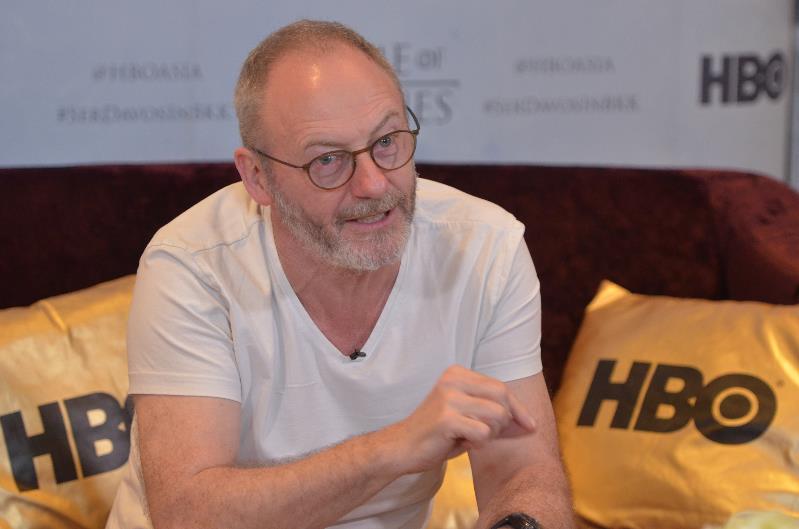 BANGKOK, APRIL 4, 2017 – Liam Cunningham (#SerDavosInBKK), who plays Ser Davos Seaworth, the Onion Knight and Hand of King Stannis Baratheon in the hit series, GAME OF THRONES, was in Bangkok this week to promote the seventh season of the series. GAME OF THRONES (#GameofThrones) will return for its seven-episode seventh season (#GoTS7) in Asia on MONDAY, JULY 17 at 8am (Thai.Jkt) / 9am (Sin.Hkg), exclusively on HBO, with a same day primetime encore at 8pm (Thai.Jkt) / 9pm (Sin.Hkg). The series will also be available on HBO On Demand and HBO GO in selected territories where available.

Attending an exclusive press day with regional media earlier this morning, Cunningham said, “I’m happy to be back in Asia because of the hospitality that the region will give to anybody, the generosity of spirit and the warm welcome that puts a smile on every face.” He further adds, “I am excited as everyone else about season seven of GAME OF THRONES which promises to be bigger, better and more cinematic.”

Returning to Bangkok after his first visit fifteen years ago, Cunningham immersed himself in the culture that the vibrant city has to offer. He visited some of the iconic sights of the city including the Grand Palace and the popular Chatuchak weekend market. He enjoyed some of Bangkok’s local culinary delights including Tom Yum Soup – Spicy Shrimp Soup; Green Curry, Phad Thai – Fried Noodles, Mango Sticky Rice and even had a taste of exotic snacks such as fried insects. While he was there, he also found time to explore the ruins and temples of Ayutthaya and had the chance to ride on the iconic Tuk-Tuk – a three-wheeled automated rickshaw.

About GAME OF THRONES

The most-watched series in HBO history and a worldwide TV phenomenon, GAME OF THRONES begins its seven-episode seventh season in Asia the same time as the U.S. – exclusively on HBO this July 17 at 8am (Thai.Jkt) / 9am (Sin.Hkg), with a same day primetime encore at 8pm (Thai.Jkt) / 9pm (Sin.Hkg). The series will also be available on HBO On Demand and HBO GO in selected territories where available.

Singapore-based HBO Asia brings the best of Hollywood to Asia first through its exclusive licensing deals with major Hollywood and independent studios, including Paramount Pictures, Sony Pictures, Universal Studios, Warner Bros. and Lionsgate. HBO Asia has proprietary and award-winning HBO and HBO Asia Original programmes that are produced exclusively for HBO viewers. Wholly owned by HBO (a Time Warner company), HBO Asia reaches 23 territories across Asia and offers a bouquet of channels and services including 24-hour commercial-free subscription movie channels in standard-definition and high-definition – HBO, HBO SIGNATURE, HBO FAMILY, HBO HITS, CINEMAX and RED by HBO – as well as HBO GO and HBO ON DEMAND. HBO Asia is also the exclusive distributor of BabyFirst and the DreamWorks channel in Asia. Log on to www.hboasia.com for more information.