Macau, 07 November 2017 – Members and supporters of the newly-established Coalition Against Piracy gathered at the annual CASBAA Convention in Macau on November 7th to mark the initiation of joint work in southeast Asia against Illicit Streaming Devices (ISDs) and the app networks that underpin them. 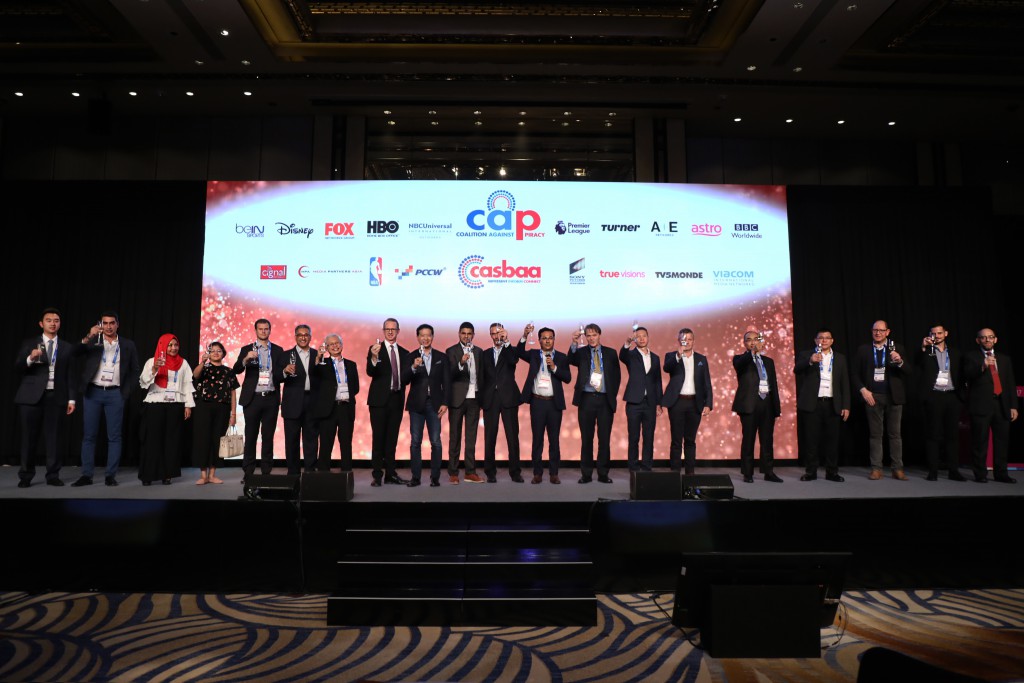 In toasting the launch, Birathon Kasemsri, Chief Commercial Officer, True Visions Group said “Piracy is an international issue that cannot be dealt with by a single entity or country alone. It cannot be dealt with by a single platform alone. It must be a coordinated, integrated effort. We need to create an environment where we can grow and prosper. I invite you to put all your efforts together to make CAP the new initiative in the region a huge success – because we can only prosper from CAP’s success.”
The Coalition, which brings together a wide range of content providers and major Pay-TV platform operators, was established by multichannel video Association CASBAA to provide a vehicle for cooperation in copyright and anti-fraud enforcement against the small streaming devices which media publications have described as “the little black box(es) which took over piracy”. The illicit TV boxes have become a major drag on both traditional Pay-TV and “new media” OTT markets in Asia; a recent market survey reported that 14% of consumers in Singapore, for example, admit to regularly using an ISD. And those numbers are believed to be growing.

“The driving force behind establishment of CAP is the need for united, collective action by all branches of the video industry”, said CASBAA Chief Policy Officer John Medeiros. “Sports, films, TV series, international as well as local content – everyone trying to deliver quality content to the public is threatened by the inundation of ISD boxes and apps from commercial piracy syndicates. CAP aims to bring all these stakeholders together, and work in parallel with other similar coalitions around the world.”

In outlining CAP’s key priorities, Neil Gane, CAP General Manager, said “Two immediate priorities will be the disruption of the ISD ecosystem at its source and enhanced intermediary engagement with both eCommerce platforms and financial processors to disrupt transactions at the point of sale. Disrupting illicit commercial transactions is a key component of any anti-piracy strategy.”

Established in 1991, CASBAA is the association for digital multichannel TV, content, platforms, advertising and video delivery across a variety of geographic markets throughout the Asia-Pacific. CASBAA’s members reach over 500 million connections within a regional footprint ranging from China to Australasia, Japan to Pakistan. For more information, visit www.casbaa.com.