Mumbai, October 5, 2017: Challenging the grammar of conventional entertainment and inspiring Nayi Soch, Star India brings in yet another disruption with ‘TED Talks India Nayi Soch’ on Star Plus hosted by Shah Rukh Khan. In a global first collaboration that will make the transformative power of ideas easily accessible to audiences across India, Star Plus unites with TED – the global platform known for spotlighting and spreading powerful ideas that transform how audiences see their world. Mr. Uday Shankar, Chairman and CEO, Star India, Mr. Shah Rukh Khan and Mr. Chris Anderson, Head of TED addressed the press in Mumbai today and shared their thoughts regarding the show. 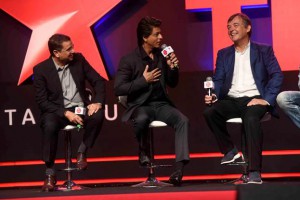 ‘TED Talks India Nayi Soch’, is TED’s first collaboration with a major network to produce a television series featuring original TED Talks in a language other than English. The show will bring some of the best innovators and thinkers of Indian origin to the center stage, hosted by Shah Rukh Khan. The show captures an eclectic mix of speakers, thinkers and doers, who have questioned norms and brought forth cutting edge ideas that have the potential to inspire billions. All these ideas which originate from personal belief and self-motivation bear testimony to the ingenuity of Indians. Scientists, Authors, Thinkers, Entrepreneurs and Artists, this show provides a global platform to these speakers from all walks of life, taking their ideas to every home in India with the unparalleled reach of the Star Plus platform. It can also be viewed on Hotstar, Star’s online video streaming platform.

Mr. Uday Shankar, Chairman and CEO, Star India said, “At Star we have always believed that conventional definitions of content exist only to be challenged. I have been a big fan of TED and felt that there is no reason why these ideas should not be made accessible to all Indians in a language of their choice. Television should offer a spectrum of content which includes not just the traditional definition of entertainment but also content that feeds the human passion for knowledge, which stokes curiosity and inspires people. The timing is perfect -. India is a young country with big dreams and potential. It is a time when the world is looking to India for the next big idea. I am excited by the Star TED partnership as it opens up a world of ideas and truly inspires “Nayi Soch”. Joining us in our endeavour is Shah Rukh Khan whose charisma and enthusiasm will be pivotal in connecting with our viewers.”

Host Shah Rukh Khan adds, “It is a huge honour to host this show. When two giants like Star India and TED come together we’re sure to fire up a billion imaginations. Bringing the power of ideas to people’s living rooms across India and reaching out to especially the youth of our country, is something that’s really exciting. I want our youth to be inspired to think of new ideas. Simple and unique ideas that pack a punch. Ideas that can change lives.”

Mr. Chris Anderson, Head of TED, said, “TED Talks India Nayi Soch marks an unprecedented step in TED’s ongoing effort to bring big ideas to curious minds around the world. Combine India’s impressive thinkers and its growing appetite for knowledge with Shah Rukh Khan’s global fan following and Star’s massive reach, and we have a real shot at offering millions of people the empowerment that inspiring speakers can bring. We’re delighted at this partnership. The Star team and Shah Rukh Khan have created riveting television that takes the TED platform to a platform to a whole new place.”

Star India has always believed in disruptively powering social change through the power of its content to influence and impact people’s lives and thought. Continuing with this journey ‘TED Talks India Nayi Soch’, will take forward Star’s commitment of creating social impact with Nayi Soch in India. Inspiring a billion imaginations is much more than a tag line, it’s a promise Star India delivers every day in ways that break away from the conventional, spark national debate and help shape the new India. Fremantle India is the production house for the show.

Stay tuned as Star Plus introduces yet another ‘Nayi Soch’. 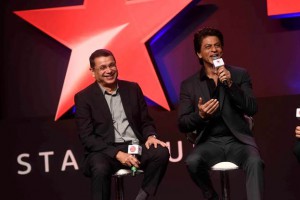 Star India has defined the Indian media landscape since 1991 and today is one of the country’s leading media conglomerates, reaching approximately 700+ million viewers a month across India and more than 100 other countries. Star generates 30,000+ hours of content every year and broadcasts 60+ channels in 8 different languages, reaching 9 out of 10 C&S TV homes in India.

Star is set to drive the agenda on digital content consumption in the country with Hotstar, Star’s revolutionary digital platform that brings your favourite TV shows, movies and sports in one destination.
Star India is a fully owned subsidiary of 21st Century Fox.
Follow us on http://www.startv.com/